Well, I did staking recommendations before, but I’ll do a whole new writeup on that considering the need for more decentralization, and this unlock time is the perfect one to consider this. At the moment, we have this stake distribution (quite stable since launch, despite staked amount growth) 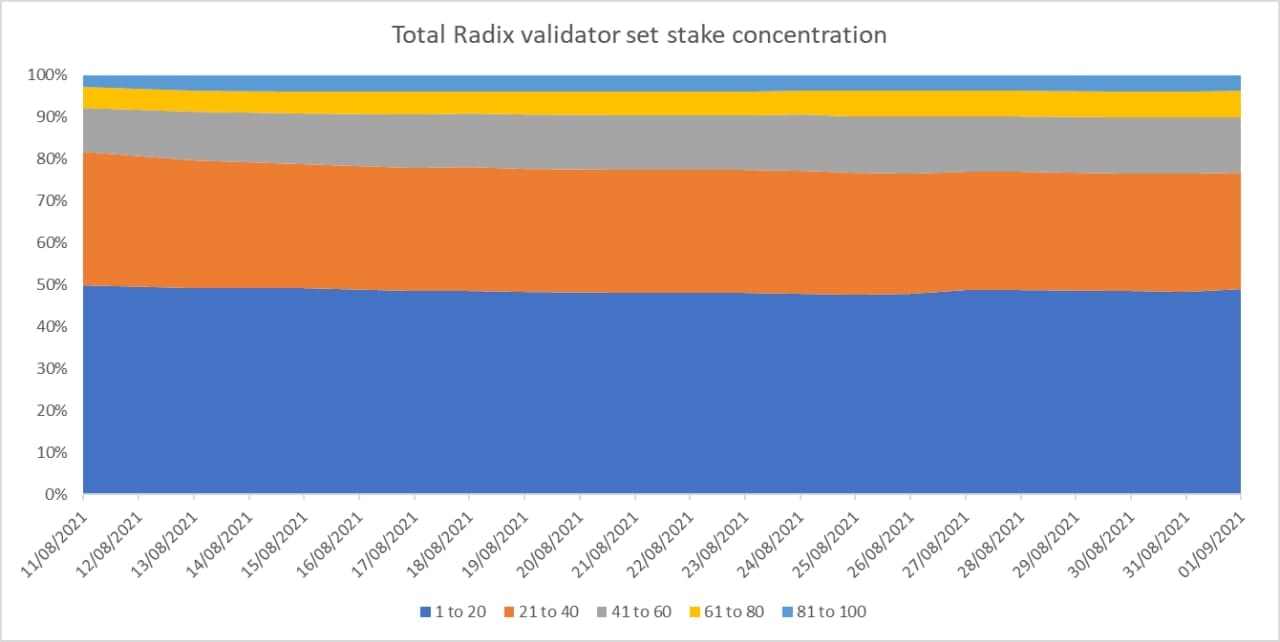 We need to be able to brag on being decentralized, because the 100 validator limit is also a point of FUD (but we know that’s only a temporary solution until X’ian, when Radix will shine and will be in fact the most decentralized network ever conceived). Ideally, to achieve a better Nakamoto Coefficient than Solana and other competitors, we’ve came with this strategy, to stake according to stake percent:

If you read my previous posts, jump this section and go straight to the list.

Don’t disregard the 5-by-5 rule already mentioned in Radix knowledgebase, namely, you should not choose less than 5 validators, each of them having less than 5% of total stake (well, we reccomend below 3% in this guide). Although that’s a good general guidance, if each delegator could spread that stake among any number of validators from 5 to 20. Regarding the point of view of the risk of downtime itself, more than 30 would not make any difference. So, if you feel you can make it spreading amongst 20 of them, go ahead, if you think it’s an overburden, choose any amount between 5-20 validators.

The criteria adopted here is somehow biased into the betanet validators, as those had more time and experience in Radix specifics, and long time community supporters, who of course had done the greatest contribution to the project so far. I don’t think that’s unfair or any favouritism at all, since those guys have contributed so much to the project, they already deserve at least a trophy 😂😂.

I’m completely disregarding fees that validators charge (since they are in my opinion all inside a fair range). If I missed or forgot any valuable betanet or community member, it’s just that’s imposible to remember everyone, and of course, put them in a limited list. Last disclosure, I make a some of fun and jokes in the list, so please don’t take it too seriously and take no offense.

Based on this strategy, here are my recomendations (based on my personal opinion, not a Radix official endorsement because I’m a mod)

I suggest reading this guy website. He has a very comprehensive and respectable value proposition, as he cares very much for decentralization and has some bold balsy propositions. He is a very experienced IT professional and with no doubts knows his deal. We even vouch to stake on both of his nodes, so I’m posting his two addresses below:

This guy had some pretty harsh comments on the unlock debate, but he’s been contributing a lot to the community, and if pro-unlocks are right, I guess he will be happy and also this +rep might give him some confort. No harsh feelings, huh? 😂😂

This guy is a young kid, going to study computer science at university. Could be a good opportunity for him (as long as he’s not sleeping or drinking when he should be monitoring his node 😂😂)

Nodes with less than 1% total stake (40% of your holdings)

I like this guy, I feel very positive vibes from him, he is also a youtuber and made some great Radix videos during the first Radvocates program and keeps doing them.

Anton is a long time supporter of this project. Although having the same hability in relationship’s as a war tank 😂😂, he’s surely committed to the long term success of Radix, and cares a lot about our community (what kind of community we want to build…).

Russian validator, very knowledgeable node runner (although he is a betrayer!! Runs nodes on various netoworks!!! Not Solana, pleeeaaase 😂😂), and has higher end and reliable infrastructure (more than needed, in fact… you show-off 😂😂)

Also proved worthy of this vouching being an active betanet supporter.

Also run by Vlad from Ideomaker.

I maybe didn’t even need to vouch for this guy, since he’s excelent at marketing himself. He has sent everyone the FLOOP tokens which no one knows what to do with it yet 😂😂. But the most incredible contribution he does is the tweets with on-ledger data analisys, really usefull.

Suena has been very active in twitter and has contributed to the community a lot.

I can relate to Ed as we both are coming from other areas, as we did not exactly work as IT professionals before. He demonstrated in betanet, though, he’s competent, dedicated, reliable, and also a very nice guy.

Valuable and active betanet tester. He has done a great work at his radix portfolio app

Although I don’t like that he runs nodes for the competition 😂😂, he was one of the most active and helpfull members of the betanet testing, done already tons of work in tools to help the ecosystem, also a nice guy, so he earned his position in my favouritism here. Check his awesome dashboard if you haven’t already.

Also a long a long time supporter and follower of the project.

Mohzi Janasena is a very good developer that is constantly adding value to the community as well. It’s redundant to say he’s also a nice guy since this community is so full of nice guys 😂😂. Also helpfull, lended me some of his time to give me some tips.

Vlad has an amazing NFT project he wants to launch on the Radix Network after Babylon. Let’s support this guy.

Awesome artist that made nice contributions doing the first Radix “NFT” (between quotes because he made them even before the network supports NFTs).

Crypto Commie. Let’s see if he’ll give all his rewards to the poor 😂😂.

Faraz showed excelent work during betanet, competent node runner. He’s so helpfull and nice, that he has also recently been invited to moderation of the channels. Nice addition to the mods crew!

Also a helpfull and active node runner during betanet, showed commitment and reliability. Unnecessary to say that he’s also a nice guy.

<humble-mode-off> Of course, if you are reading this, you already chose us. Nothing much to say here. <humble-mode-back-on> 😂😂 We take care of Radix like if it was our baby!!! We’re always there making sure things are okay. We also give back in $XRD, as we’re commited to the community fund. Also check the awesome work Michael is doing on radixscan.io and @EmmogluStakeryBot Telegram bot, if you haven’t already.

I didn’t know Stuart before betanet, but he showed up and provided helpfull and valuable input both to the team and to other node runners. He’s a very knowledgeable and experienced in IT infrastructure.

OG GC supporter of the project. Those guys you can really trust!!

We all love a friendly dog, don’t we? Specially when we have him as community mod. And also Bugs Bunny and the Tiny Toons are staking with him 😂😂.

Well, this guy probably doesn’t need your stake delegated anyway, but as long as he leaves that option open, you can delegate to him, because his node has to stay up as he has too much at stake 😂😂 (pun intended).

The brain, the legend, the destroyer of competitors. This man is of an incredibly value to this project, and have been long doing an awesome work of debunking competitors claims in what regards sharding and atomic composability, and have heroically been banned of all their communities, just for asking the difficult questions they really can’t answer (good job pal!!). He’s a very knowledgeable in everything it takes not just to run the node, bur also everything else.

What I can say of Mleeko is the same I said above about Mohzi.

This guy has a beautifull story about his father on his website. Really a nice guy, always present and helping the community.

🤷🏻‍♂️ I had to include someone here 😂😂 Better if spread that stake on the range below. Or put all in Emmoglu 😂😂😂😂